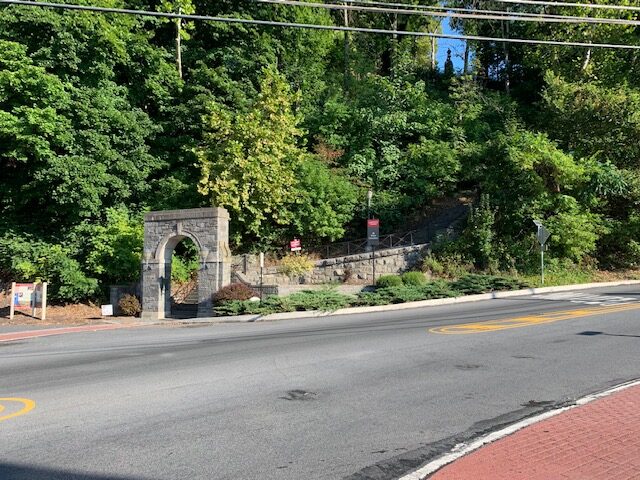 Thanks to a grant from the Commonwealth Financing Authority’s Multimodal Transportation Fund, this project will make substantial improvements to the pedestrian pathway that connects Downtown Easton with the College Hill neighborhood by reconditioning the historic stairs that serve as the primary city-campus transition.

In addition, we will be constructing a new walking and bicycling trail between the Karl Stirner Arts Trail and South College Drive (near the intersection with McCartney Street). When completed, the project will ensure safe public access throughout the year and reduce reliance on motor vehicles.

About 1,100 feet of new trail will be constructed as part of this project, providing a 6-foot-wide pathway. About 650 feet of existing trail will be repaired or replaced. Amenities will include better lighting, new seating areas, and locations for displaying artwork.

As of December 2022, temporary barricades have been installed around the construction area, and we expect the work to finish by July 2023. During construction, the following will be available as alternate means to access downtown:

We are pursuing a crosswalk at the intersection of College Avenue and McCartney Street and working with the Pennsylvania Department of Transportation for approval, as College Avenue is a state road. In the meantime, we recommend other crossing options, but if a walker must cross at that location, they should take care in looking in all directions before crossing. An alternate option is to take the LCAT Shuttle, which has a stop at McCartney Street and Clinton Terrace.